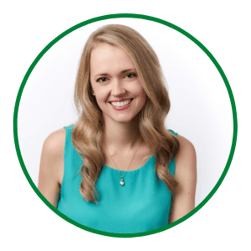 Karley Woodrich, OD, is a partner with Wentz and Woodrich Eyecare in Lubbock, Texas.

Like many ODs, motivation to outsource claim filing often begins when you start struggling with insurance claims. This couldn't be more true for Dr. Woodrich's practice, as she quickly realized OD's needed help billing to focus attention on patients to successfully grow their practice. Furthermore, insurance could be complicated, work-intensive, and probably not the best use of time for ODs.

For Woodrich, the opportunity cost of dealing with insurance in-house from the beginning was not worth it. Considering all the responsibilities involved with opening a new practice, she thought it would be best to hire a company that will file your claims for your practice, which is why outsourcing is the best strategy to take.

Learned Billing as a New Practice

The more knowledgeable new practices can be, the better off they will be with long-term billing. Choosing VisionWeb’s RCM services had a positive impact on Woodrich's business strategy in a few ways. Firstly, VisionWeb’s RCM services provided guidance and support right from the beginning of implementation. They allowed Woodrich's practice to be hands-on so their team can learn about the insurance process through trial and error. RCM's efficient workflow allowed Woodrich's eyecare practice to understand areas of weakness, identify mistakes and fix processes.

Additionally, VisionWeb made themselves available, helped their team with new terminology, sent articles to further learning, and taught filing and recorded tasks that kept reimbursements and cash flow running smoothly.

Dodged the Headaches of Denials and Rejections

Before hiring VisionWeb, Woodrich understood they were making errors in billing. If their practice failed to change their billing practices quickly, then they could experience more denials and rejections. Woodrich states, "dealing with denied claims is another reason I would recommend outsourcing insurance billing. I saw how the VisionWeb team worked denied claims, and it seemed like there was another layer of complication that we wouldn’t want to address on our own. Without VisionWeb, we would have lost a lot of time, money and energy dealing with denied claims. This is where their value really kicked in for us." 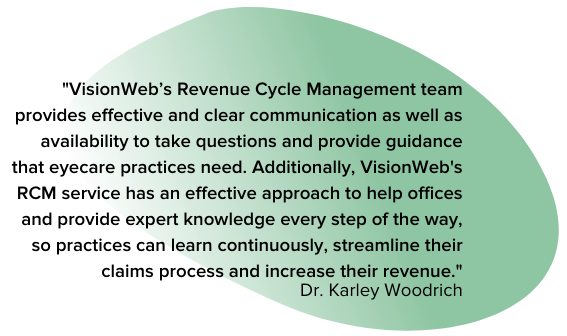 Outsourcing claim filing had a positive impact on Woodrich's bottom line. Without it, they would be lost and may have missed out on a lot of revenue.

In Woodrich's two-doctor practice, if they missed $2,000 in billable revenue per month, then that would accumulate to $24,000 per year. Now, imagine they increase their patients by 50 percent in their second year and they're still not fixing their errors in insurance. That’s an estimated $36,000 of additional missed revenue in the second year of the practice.

Trusting VisionWeb with billing was imperative to attaining Woodrich's financial goals. VisionWeb helped maximize revenue in a short amount of time, despite having zero experience and knowledge of insurance. Woodrich's team didn’t know how to read an EOB and they learned early that talking with insurance companies can be time-consuming. VisionWeb's RCM team allowed Woodrich to use invaluable time and energy to focus on seeing patients and optimize other areas of her practice. Woodrich is confident that their insurance needs were being met while they created efficiencies elsewhere for their practice.

Generated Long-Term ROI
Lastly, outsourcing didn't leave Woodrich's practice beholden to one salaried employee who does all the insurance. It provided consistency and back-up to ensure a smooth workflow regardless of any employee turnover our practice might face. Woodrich strongly recommends VisionWeb’s RCM services for a practice that does not have a strong back office. For her, outsourcing pays for itself, and VisionWeb is financially incentivized to get paid the most on every claim.

Overall, Woodrich believes VisionWeb provides a healthy ROI for her practice. The claim process can be time-consuming and results from those claims can take weeks to be revealed, if claims are filed correctly, she can only imagine the revenue that would be missed from a broken process accumulated across months or years.